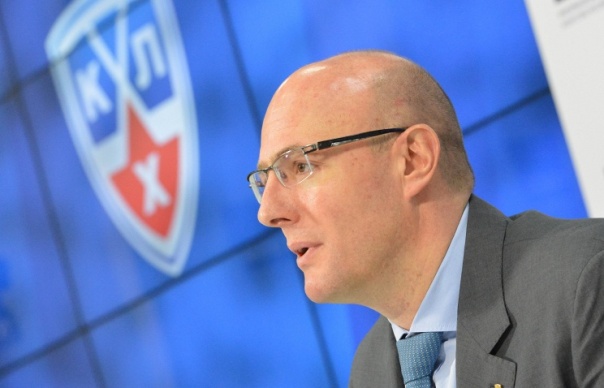 KHL President Dmitry Chernyshenko, who is entering his first full season as head of the league. (Image Source)

[I am very happy to turn over the blog this evening to Aivis Kalnins, with an excellent and concise guide to the complicated subject of revenue sharing in the KHL.  Take it away, Aivis!]

The Kontinental Hockey League (KHL), for the first time in the league’s history, has received enough income to award teams with approximately 100 million Russian rubles or about 1 506 500 Euros, recommending that the money be used for servicing of equipment and the modernization of the arenas.

The largest amount will be transferred to last year’s Gagarin Cup champions – SKA St.Petersburgh (12.89 million rubles or about 194,194 euros).  The regular season champions CSKA Moscow will receive 8.95 million rubles, or around 134,836 euros, and last year’s Gagarin Cup finalists Ak Bars Kazan will receive 7.41 million rubles or 111,635 euros.  The rest of the payments for other teams were not disclosed but here we can take a look how the Board of KHL decided to split it so that everyone gets something: 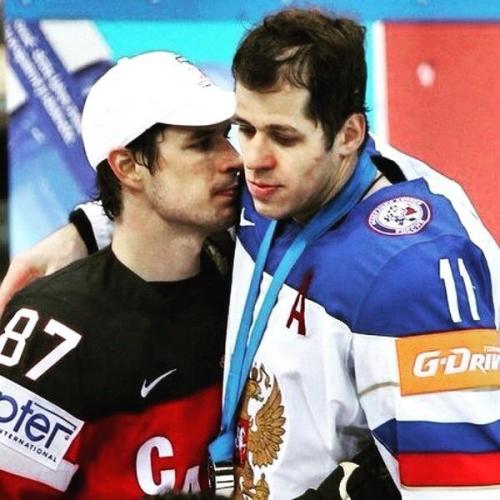 In the end, it was a bit of a shmozzle for Team Russia.  Sudnay’s IIHF World Championship gold medal game, a classic match-up between the defending-champion Russians and the Canadian team, petered out in a 6-1 victory for the Canucks, and the final shot count of 37-12 for Canada tells us that the result was fair on the day.  Team Russia’s disappointment at the end was bitter and palpable; only Alexander Ovechkin, Yevgeny Malkin (scorer of his team’s lone consolation goal in the game), Dmitry Kulikov, and Viktor Tikhonov hung about to hear the Canadian anthem played.  It appears, at this point, that there will be consequences for that early departure, too.  So what happened, and what should the folks in charge of Russian hockey take away from the games in Prague and Ostrava?

END_OF_DOCUMENT_TOKEN_TO_BE_REPLACED

KHL Playoffs: That, As They Say, Is That

After SKA St. Petersburg’s amazing comeback in the KHL West Conference Final against CSKA Moscow, the actual Gagarin Cup Final was always likely to be an anticlimax.  Nonetheless, some interesting questions were in the air as the series between SKA and Ak Bars Kazan opened last Saturday.  Would SKA’s miraculous feat in the previous round leave them with tanks empty, too physically and emotionally exhausted to breach the notoriously stingy Ak Bars defense?  Or would it imbue the team from old Leningrad with the confidence and vigour necessary to bring the city its first ever hockey championship?  In the end, as you may guess from the picture above, it was most definitively the latter.

Below the jump, a look back at the 2014-15 Gagarin Cup Final! END_OF_DOCUMENT_TOKEN_TO_BE_REPLACED

KHL Playoffs: To the Finals! 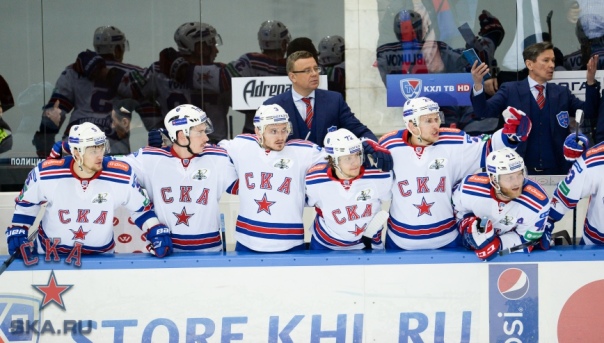 The SKA St. Petersburg bench watches the final seconds of their tremendous comeback against CSKA Moscow tick away. (Image Source)

Through the first couple of rounds, the 2014-15 Gagarin Cup Playoffs had largely failed to provide much in the way of nail-biting drama.  There had certainly been wondrous moments, good or bad depending on one’s affiliations, but only a single series out of twelve had made to seven games, and only two others had gone as far as six.  And, when the Conference Finals rolled around, the East largely followed the script.  Ak Bars Kazan saw off Sibir Novosibirsk in a tidy five game set, not allowing a single goal in the final two matches of the series.  The Tatar giants advanced to their third Final in the KHL’s seven-year history, having emerged as champions on the previous two occasions in 2009 and 2010.

But over in the West, it was a different matter…  Below the jump, a look at the amazing series between CSKA Moscow and SKA St. Petersburg, plus some notes on the Gagarin Cup Final!

END_OF_DOCUMENT_TOKEN_TO_BE_REPLACED 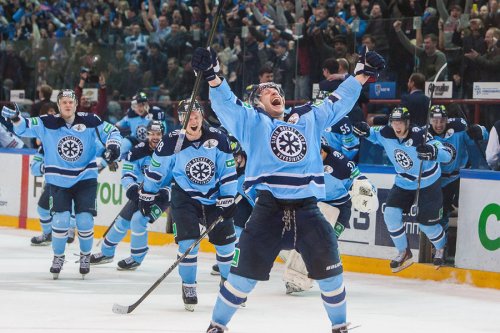 Sibir Novosibirsk were a cheerful bunch after advancing to the Conference Finals for the first time ever (seriously, that’s about the happiest hockey player I think I’ve ever seen). Were they still smiling after Game 1 against Ak Bars? Find out below! (Photo via hcsibir.ru)

Small sample size alert!  The KHL Conference Finals are each one game old at this point — have we learned anything of importance?  Perhaps, perhaps not, but only the next few days will tell us for sure.  That said, there’s nothing stopping us from making a few trenchant observations below the jump on the state of affairs so far!

END_OF_DOCUMENT_TOKEN_TO_BE_REPLACED 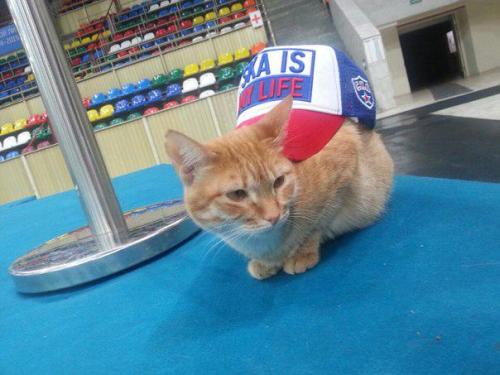 Her boys were outscored 8-1 over two games at home, and somebody made her wear the enemy’s cap — All in all, it was a tough couple of days for Mashka, the Dynamo Moscow cat. (Image Source: Mashka’s twitter account).

The KHL playoffs roll along, with the last eight teams duking it out with the goal of halving their number.  Below the jump, a few random-ish observations on how the second round has gone so far! END_OF_DOCUMENT_TOKEN_TO_BE_REPLACED 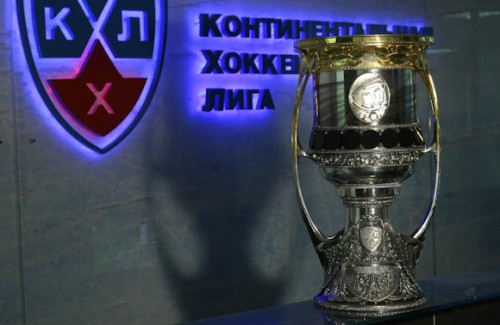 Just a quick reminder of what it’s all about, at this time of year! (Image Source)

It has been an interesting first week of playoff activity!  There have been some odd scores, a heroic performance or two, and although we haven’t seen any massive surprises yet — well, five of the eight series are still going, so there’s time.  Below the jump, a paragraph or so on what each of the first-round matchups has looked like so far! END_OF_DOCUMENT_TOKEN_TO_BE_REPLACED 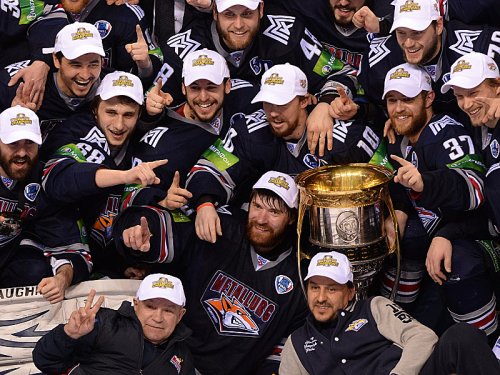 Remember these fine fellows, from 2013-14? They’re once again looking good as the East Conference playoffs get set to start. (Image Source)

As the KHL postseason gets rolling we head off to the East Conference, providers of last year’s Gagarin Cup champions Metallurg Magnitogorsk.  Is there a repeat in store?  Are the boys from Omsk back among the serious contenders?  And what are the putting in the water in Novosibirsk?  We make some guesses below the jump! END_OF_DOCUMENT_TOKEN_TO_BE_REPLACED 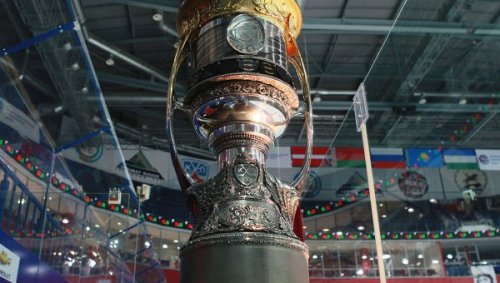 We turn now, at this blog, from the early days of Soviet hockey to the present.  The seventh edition of the KHL playoffs commences tomorrow, so it’s time to take a look at what the first round might hold.  We’ll begin with the West Conference, including the regular season champions versus some precocious newcomers, not to mention a fascinating rematch from last season’s first round!

Below the jump, we look at each series in the West, make some predictions, and even wander down a sideroad or two! END_OF_DOCUMENT_TOKEN_TO_BE_REPLACED